WHAT DOES A 4,300KM RELAY RUN LOOK LIKE?
Monarch Ultra Relay Run: September 19th - November 4th, 2019
THE RELAY: The Monarch Ultra is a 4,300km (2,671 miles) relay run following the migratory path of monarch butterflies from Peterborough, Ontario to the Sierra Madre Mountains in Mexico. Ultra-runners are invited to explore a diversity of landscapes along mountain paths, forests, meadows, deserts, trails, and cities across the North American continent!  Relay runners, running in pairs when possible, will run approximately 50km or 100km segments over 47 days, as follows: 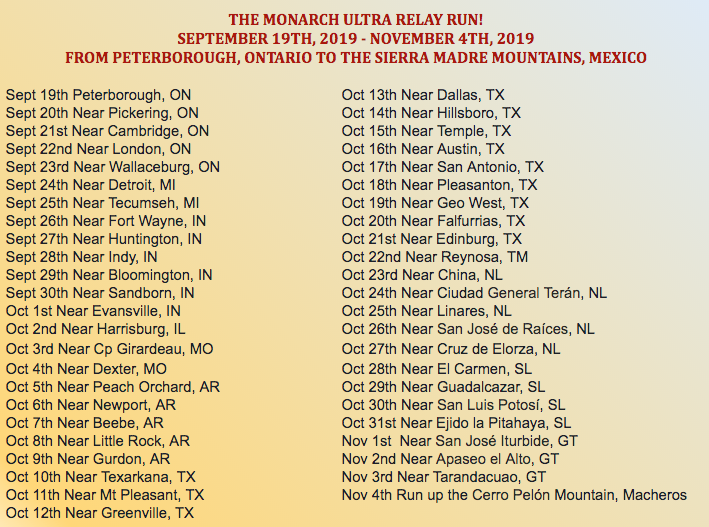 REGISTRATION: To register as a runner, contact Clay Williams, the Run Director, at 100mileclay@gmail.com and let him know which section you’d like to run - which date and which distance. You’ll be asked to sign a waiver, provide some personal information & pay a registration fee.

​DOCUMENTARY FILM: An exciting part of this project will be the production of a documentary about the relay run, the runners, the plight & flight of monarch butterflies, and conservation efforts across the continent.​​

RELAY RUN: All donations raised by runners' fundraising efforts will go directly to Monarch City USA, a nonprofit committed to monarch conservation across the USA.​

The Monarch Ultra route.
Powered by